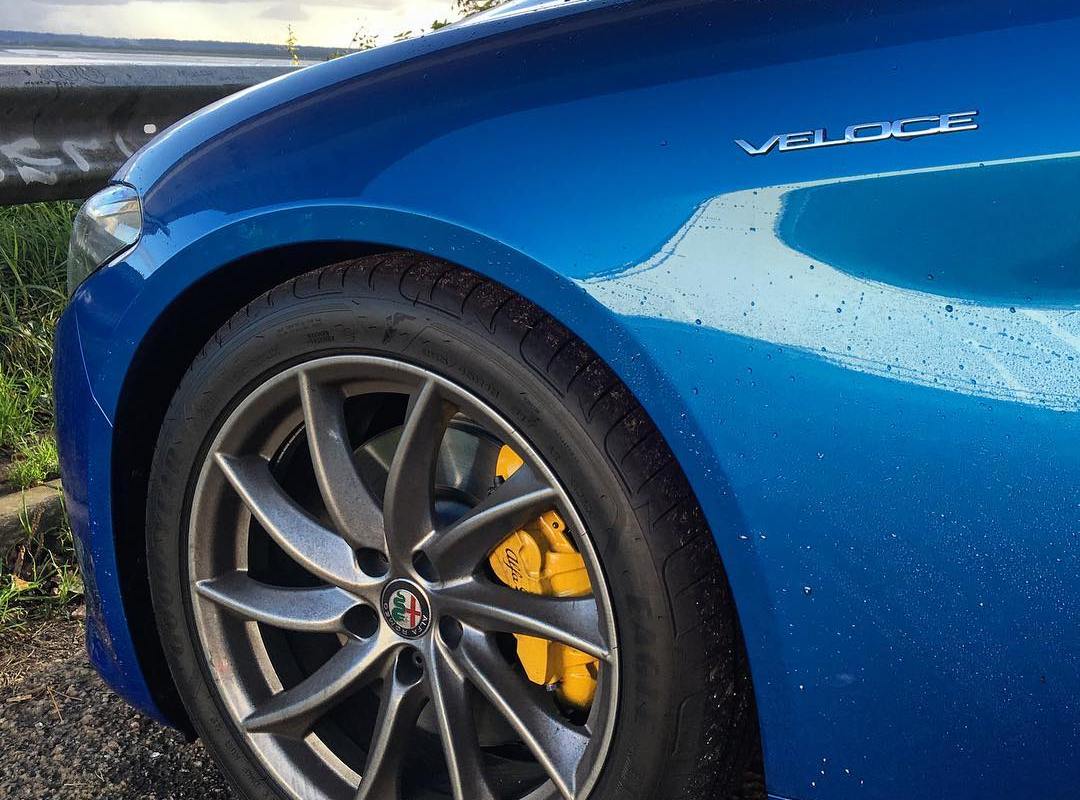 Alfa Romeo. You hear the name and what do you picture? Italian style, sophistication and sportiness. Or alternatively worries of poor reliablility, frequent roadside assistance and constant trips to the dealership?

With the Giulia Veloce we’ve so far experienced a mix of the two views. 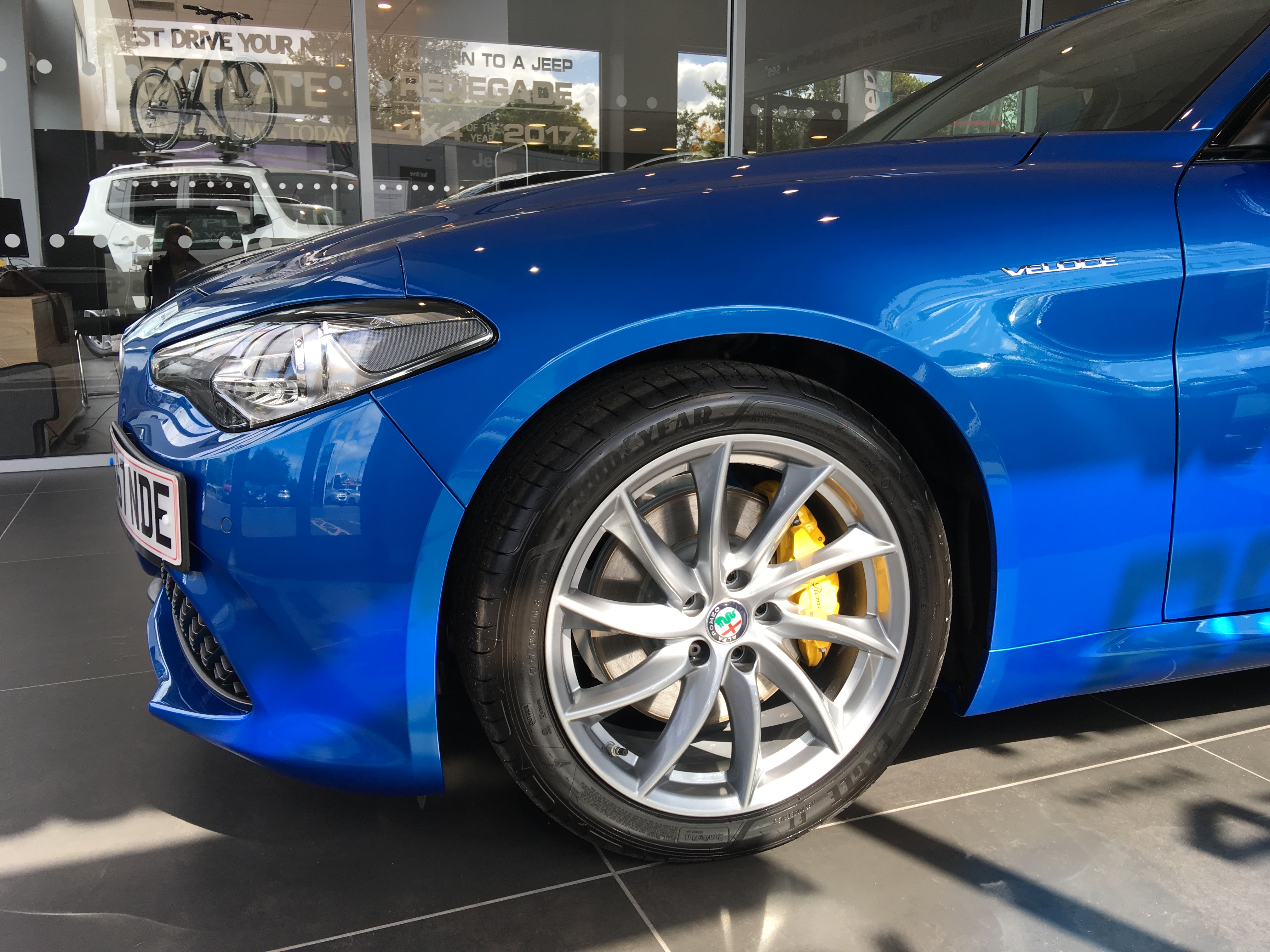 The negatives: Generally the Giulia has some interesting design decisions. The door pockets are so narrow you can’t fit a 500ml/20oz bottle of Coca-Cola in them, so you have to use the two central cup holders, but this then blocks access to the heating controls and buttons for the heated seats and steering wheel.

There is a large looking storage area in the centre of the car, you lift the armrest though to find out this is barely big enough to fit an iPhone 7+, there seems to be a lot of redundant space that’s not utilised.

The nose of the car is prone to scuffing over speed bumps, or on any sort of angled surface it would seem. If you have an angled driveway you might want to consider something with more ground clearance.

The main navigation screen is quite dark to look at and we’ve heard if you wear polarised sunglasses it’s very difficult to see properly. The screen has a plastic cover overlaying it which appears to be fitted very tightly as you can see the stress marks in the plastic. 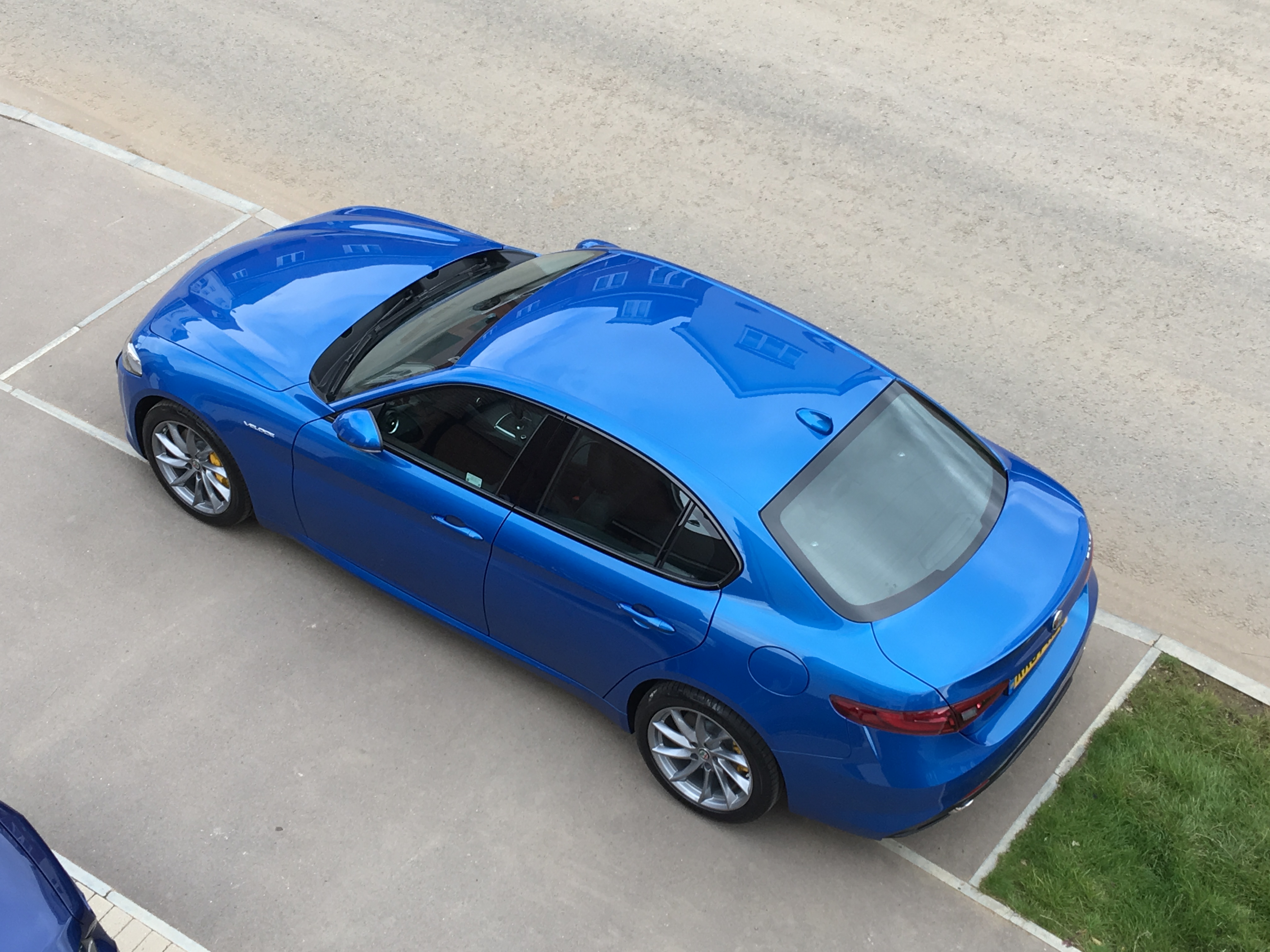 In terms of quality control overall we’ve had issues with the paintwork, with some dark patches on the trunk and raised/uneven patches on the nose. There are also some ‘dimples’ above the front and rear wheel arches.

For a car painted in a dust free environment, portrayed in Alfa Romeo’s own press videos as being as clean as an Intel computer lab it’s a bit worrying. If something so visual has issues, what else is lying behind the scenes? We’ve been asked to take the car to a 3rd party paint shop so they can assess the issues and provide a quote on repairing the paint which Alfa Romeo will then act on. Do we want panels resprayed on a brand new car? No. We’ll keep updating on how this gets resolved.

Pottering along we’re averaging 29mpg – no where near the official figures, but we’re hopeful this will improve over time when the engine loosens up. On longer motorway runs at 70mph over 100 miles we just about managed 41.5mpg.

Our most recent issue has appeared during the colder, winter days. On chilly mornings the passenger air vent makes an ungodly vibrating noise (you can see it on the AutoUX Instagram channel http://instagram.com/autoux).

Alfa Romeo build quality….We’ve not had the Giulia long but it’s already having a few issues. The vents have started making this lovely noise on colder mornings. We’ve also had issues with marks in the factory fresh paint. Italian design and Italian build – will it end up making us lust for another German brand? We’ll keep you up-to-date. #AlfaRomeo #Giulia #AlfaRomeoGiulia #Veloce #rattling #rattle #buildquality #Alfafail #FCA

It’s intermittent, so quite difficult to diagnose but will eventually need a visit to the dealership for a fix. 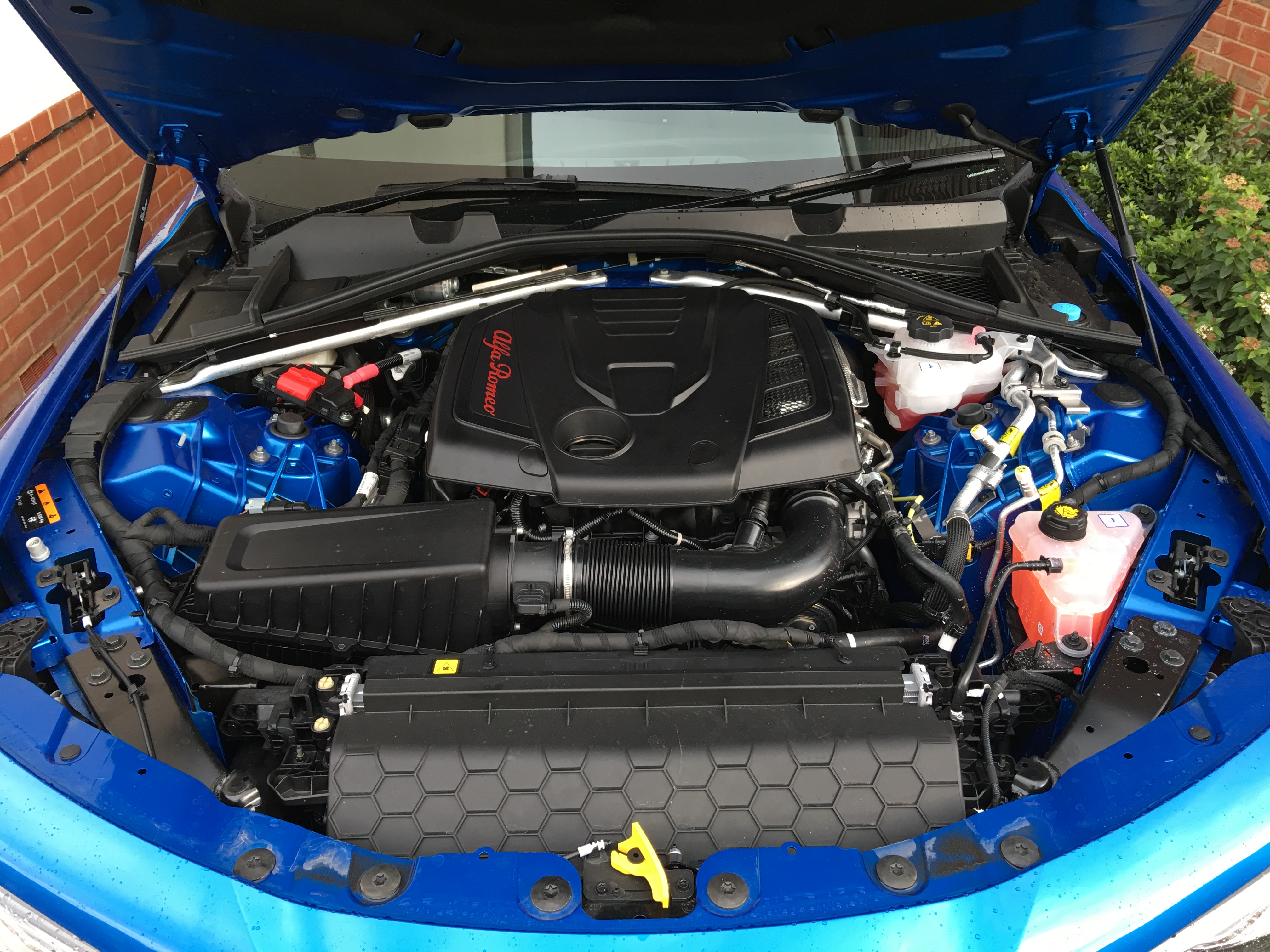 The positives: The Giulia is very pretty to look at and has attracted a fair few head turns, or people pointing it out to their friends. (This has mostly been the 16 – 20 year old male part of society, so don’t assume it’s all positive attention!)

It’s pretty unique, so far we at AutoUX have only seen 3 other Giulias on the road in the last 6 months.

The steering is super sharp, making the car feel lively – coupled with the 280bhp engine the car is fun to drive at both fast and slow speeds.

The interior (so far) feels well put together and rattle free and the powered drivers seat slides back when turning off the engine, making it easier to climb in and out.

The colour combinations work well and make the car look even better, we opted for Misano blue with yellow brake calipers with the black leather interior (copied directly from the brochure we admit).

How does it compare? The previous car in the AutoUX garage was the Mercedes Benz C350e Plug-in hybrid which was much more fuel efficient, yet had almost the the same performance for almost the same price, in fact the lease deals were cheaper than the Giula at the time. The Giula by comparison feels a bit more of a dinosaur, with much less of the tech and a much thirstier appetite. 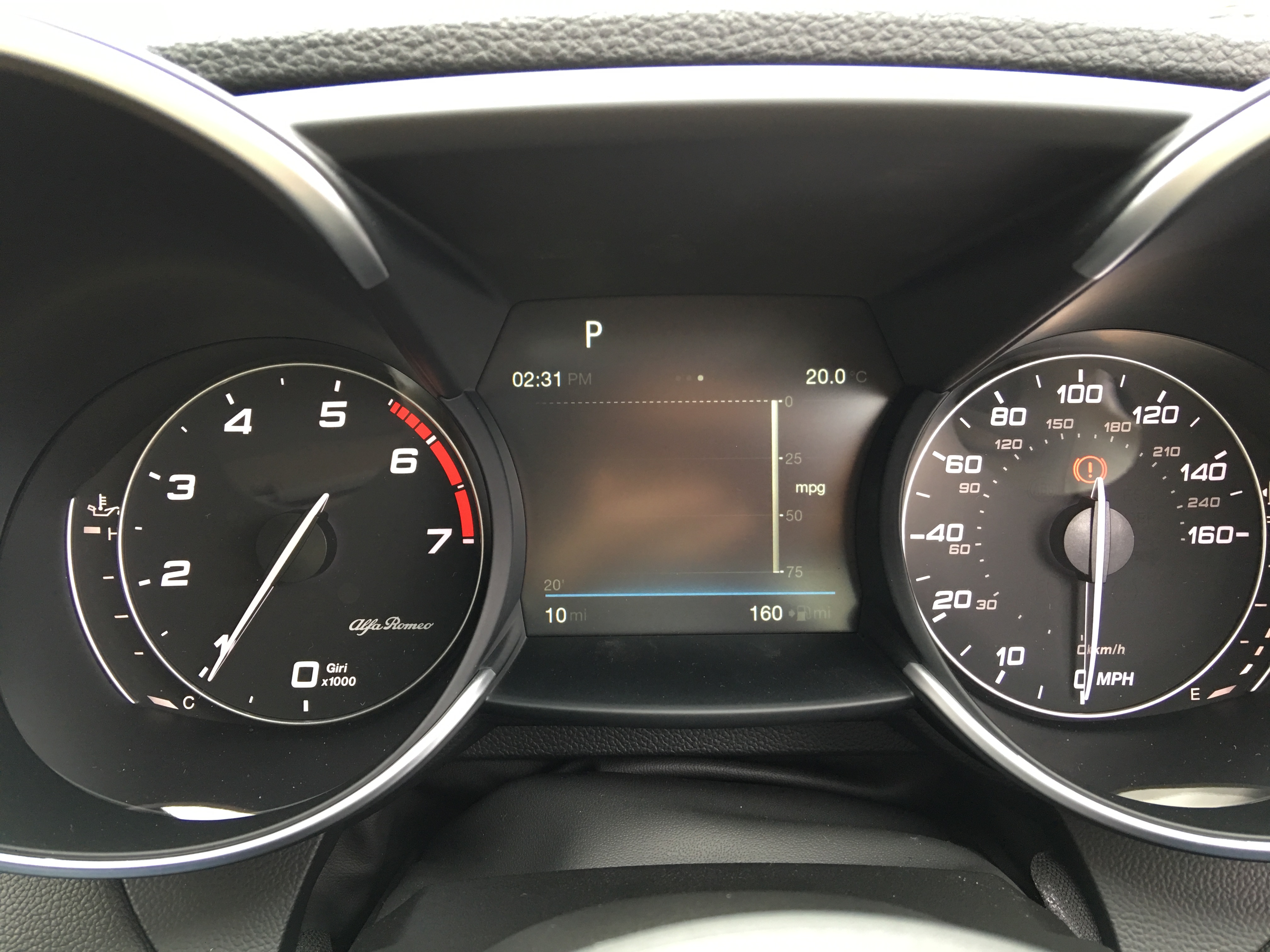 Would we buy another one? So far it’s too early to decide. But probably no – this will depend a lot on Alfa Romeo’s ability to solve our paint issues and the ongoing customer service and our initial impression of Alfa Romeo’s ability to keep a customer satisfied is fairly poor. The overall dealership impression doesn’t come close to other direct rivals, but we’ll talk about that in another post.